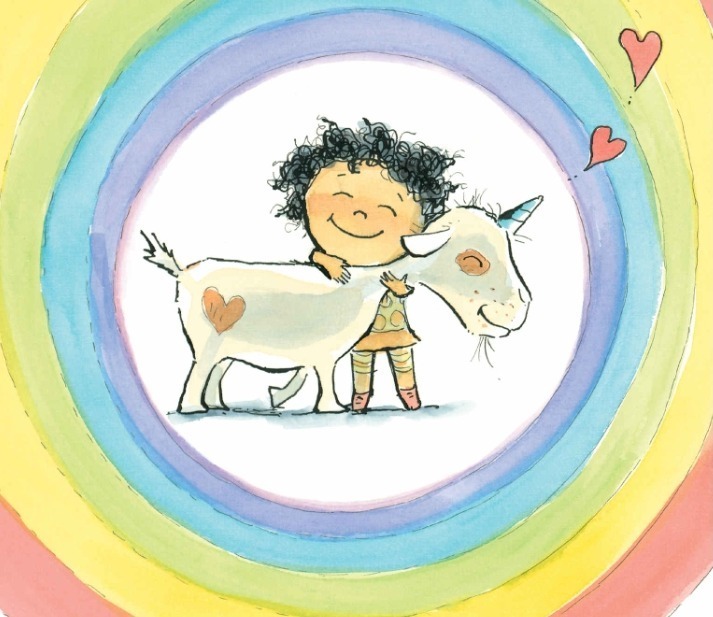 As a busy mom, I do most of my shopping online when the kids are asleep. It’s a lot more fun than dragging both a 4 and 6 year old around the busy shops.

However, sometimes things arrive a little different than expected!

Like the bright pink mens shirt that was supposed to be salmon colored, or the Halloween costume that was so small I could only get it half on ….

Well, this is the exactly what happens to Lucy in A Unicorn Named Sparkle.  Except on a much larger scale and with hilarious consequences.

A Unicorn Names Sparkle is a wonderful picture book about things not going to plan …. only to work out anyway!

The ad said, “Unicorn 25 cents.” Lucy could hardly wait and sent in her money.

She decides that he will be blue, with a pink mane and pink tail and that his name will be Sparkle …

Except when Sparkle finally arrives, he has spots, long ears and smells funny.  Oh, and he even has fleas!

Sparkle eats the flowers Lucy puts around his neck, the tutu she dresses him in, and he definitely does not want to go to show and tell.

She loses patience, tells Sparkle he is a bad unicorn and phones the unicorn man to take him back.

That night there is a storm, Lucy looks after Sparkle when he is afraid.  As she pats his head and tells him not to be a big baby, she notices his fur is soft.

Some boys come by the next day and ask what her goat’s name is.

“His name is Sparkle, and he is not a goat,” Lucy says, hands on hips.

The unicorn man shows up and Sparkle is loaded onto the back of his truck.  As he is driving away, Lucy realizes she has made a mistake and yells, “Waaaiiitttt!”.

The trucks stops and Lucy is overjoyed to have Sparkle back, even if he isn’t the beautiful unicorn she originally wanted.

A Unicorn Named Sparkle is the first in a series of beautifully illustrated stories with a lovely message.  Amy Young’s watercolor and pen style illustrations are perfect in their comic timing and just ….. well, incredibly cute and enjoyable.

A Unicorn Names Sparkle is a lovely picture book about getting something unexpected, and learning it was just what you needed!

This book is guaranteed to fast become a favorite story-time read for both child and parent.

Pro-Tips On Adding a New Dog to Your Family

The Bunnies Are Not in Their Beds

The Pigeon has to go to School