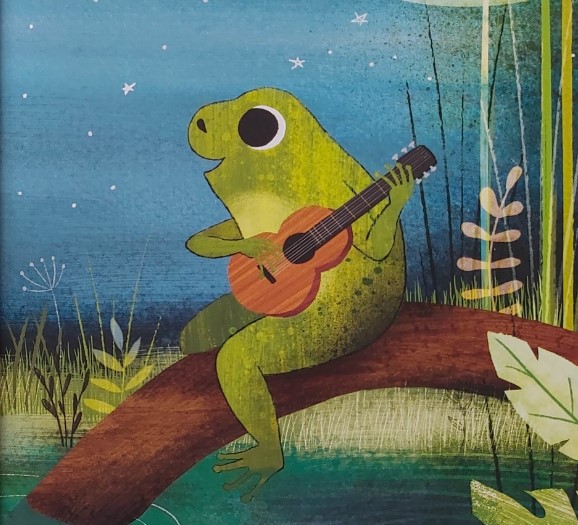 Every now and then I discover a book that from the first page, I am so awestruck by the illustrations that I don’t even read the book at first.

I spend a few minutes just flipping through the pages, taking in the details and the color scheme and just enjoying the artwork.

When I finally went back and read the words, this time with the kids, we all imagined sitting quietly by the light of the moon, listening to the wildlife sing their nature song.

In the Swamp by the Light of the Moon is a wonderfully illustrated lyrical picture book with the important message that small voices need to be heard too.

A little frog sits alone in a little green pond by the light of the moon.  He is singing his frog tune, but all by himself his voice is so quiet.  He realizes he is lonely so he goes in search of others to join his song.

He finds a crocodile humming and playing the drums and asks him to add his song.

But something is still wrong.

They invite the fish to sing along, followed by the birds.

But something is still wrong.

They find some mice singing and playing a miniature gong and invite them to join in.  But something is still wrong.

A shy little bug is not joining in.  She feels that she is far too small and her voice just isn’t pretty.

The frog reminds her that his song is unique and important like all the rest.

‘’Even small voices count, so let’s hear yours – only you sing your song best,’’ the frog says.

The little bug’s small voice carries far as she sung to the beat of the swamp.  She lit up the night like a star.

The song was now perfect.  It needed all of the voices!

Fran Preston-Gannon is an award-winning illustrator and designer whose work has been published around the world.  She was the first UK recipient of the ‘’Sendak Fellowship’ and spent an Autumn living and learning with the great master of illustration, Maurice Sendak.

In the Swamp by the Light of the Moon is a wonderfully illustrated lyrical picture book with the important message that small voices are important and need to be heard too.