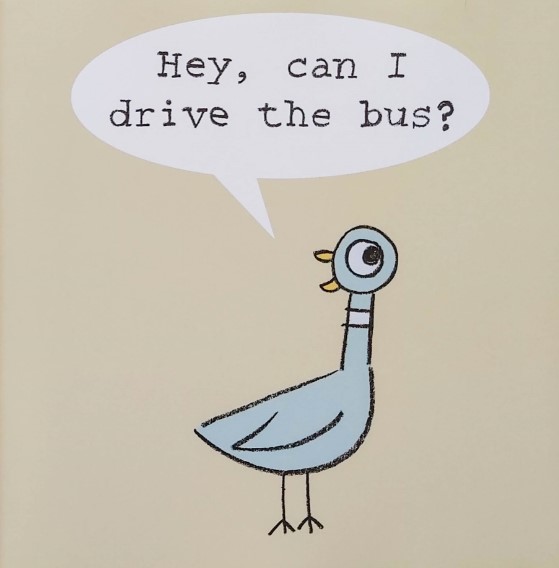 When we first read Don’t Let the Pigeon Drive the Bus, my son (aged 6) pointed out that the pigeon was just like his little sister (aged 4).

And then I sighed… because it’s true.

I am the proud mother of a loud, feisty, little girl that rarely stops talking and is no stranger to losing her temper.

This book captures a preschooler’s temper tantrum perfectly.  Perhaps this is why she likes it so much?

Don’t Let the Pigeon Drive the Bus is an award-winning, laugh-out-loud picture book about a demanding pigeon who doesn’t get his own way. This book is pure entertainment for children!

….Would YOU let the Pigeon drive the bus?

The story is told through simple, bright illustrations and the words and thoughts of a young pigeon.

Pigeon dream of driving the bus, so when the bus driver leaves for a little while to take a break, Pigeon says, ‘’I thought he’d never leave.’’

Except, the bus driver has already asked the reader to watch things for him until he gets back, reminding us not to let the pigeon drive the bus.

Pigeon immediately begins asking the reader if he can drive the bus. ‘’Please?” he asks, ‘’I’ll be careful.’’

Pigeon continues to plead, wheedle and beg his way through the book.  He uses such lines as, ‘’I’ll be your best friend!’’ and ‘’No fair!’’.

Finally, he cracks under pressure and has a massive temper tantrum. ‘’LET ME DRIVE THE BUS!!!’’ he yells in a flapping, yelling, fall on your back frenzy.

(FYI – This is my daughters favorite page!)

The bus driver returns, asking the reader, ‘’You didn’t let the pigeon drive the bus, did you?’’

Pigeon looks dejected as the bus drives away. However, he perks up when a bright red truck pulls up.

Pigeon now has a new dream!

Mo Willems is a five-time Emmy Award-winning writer and animator for Sesame Street. This was his first book for children and it has won multiple awards, including the prestigious Caldecott Honor* among others.

Don’t Let the Pigeon Drive the Bus is pure entertainment for children! An award-winning, laugh-out-loud picture book about a demanding pigeon who doesn’t get his own way. Any adult who has spent time with a preschooler can relate to this book.

* The Caldecott Medal is awarded by the American Library Association to the most distinguished American picture book for children.