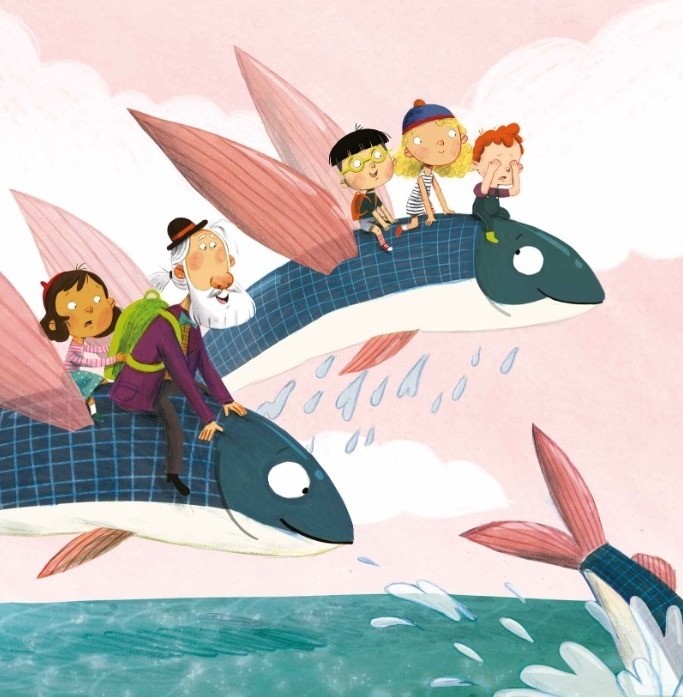 Written by the legend himself, Paul McCartney …. I really had no idea what to expect from this book.

Readers would stand in line for repeats, and not just because of the name on the cover!

Sometimes we get so caught up in trying to ‘’teach’’ our kids through books that we forget about imagination, magic, and adventure.  We forget that it is THESE things that will foster an early love of reading.

Hey Grandude! is an action-packed picture-book adventure that reminded me that stories are supposed to be fun!

The cover page shows a postcard introducing Grandude.  ‘’My name is Edward Marshall Senior.  I have four grandchildren – I call them Chillers, and they call me Grandude.’’

Lucy, Tom, Em and Bob are staying with their Grandude for the weekend.  It was grey and drizzly and everybody is grumpy.

Grandude bring out some postcards.  Em picks out a postcard with a picture of a sandy beach and says, ‘’I wish we could go there, Grandude.’’

With that, Grandude takes a shiny compass out of his pocket, gives it a rub and waves it over the postcard ….

With a Zing, Bang, Sizzle … they all find themselves at the beach having a great time.  That is until a whole lot of pinchy crabs show up.

Out came the compass again, and they find themselves in a desert valley with spiky cactuses and cowboys.  They have a great time until a whole heard of buffalos show up.

A few more adventures later and the kids get sleepy.  Grandude waves his compass over a picture of his own house and they all find themselves back at home in bed.

The kids go to sleep and the last page shows grandad asleep on the couch, dreaming of his next adventure, and snoring with his mouth wide open.

Paul McCartney changed the world with The Beatles in the 1960s and went on to receive 18 Grammy’s.  He was even knighted in 1997 by H.M. The Queen for his services to music.  I fear he won’t receive the accolades he deserves for this book as his career has already been so prolific.

Hey Grandude! is a great reminder that children’s books are supposed to be fun! It’s books like this, full of imagination, magic, and adventure that foster a love of reading, and it does this without the need for gimmicks and toilet humor.

Tiny T.Rex and the Impossible Hug