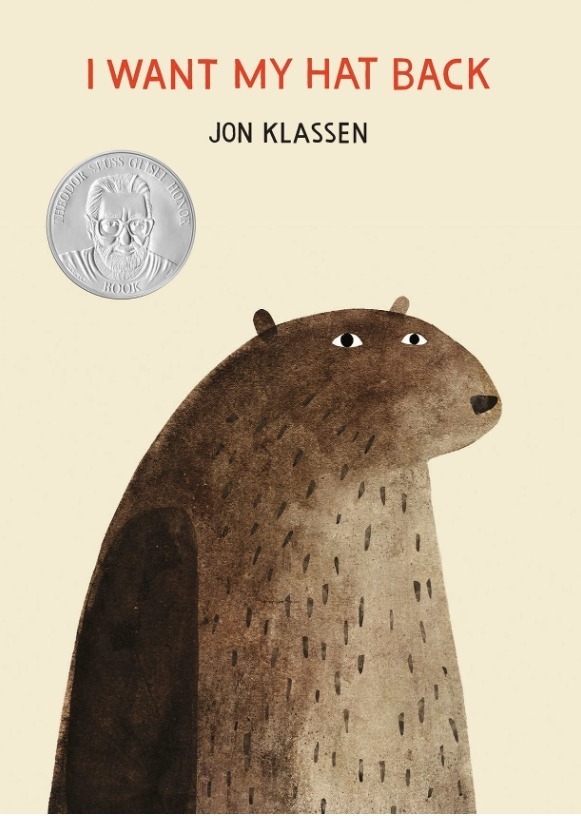 I tell myself that I’m checking them, but if I’m being honest, I just like reading them.

This one started pretty basic…

‘’My hat is gone. I want it back’’.  There is a quirky picture of a bear with suspicious eyes.  Possibly these eyes should have been a dead giveaway.

This book will be a good beginner reader for my son, I thought.  Great!

But the illustrations got quirkier. I couldn’t help but feel if Quenton Tarantino illustrated a children’s picture book, it would look a little like this.

My four-year-old daughter didn’t get it.

Her response when I explained it to her …

Which of course, made her older brother laugh even harder.

I Want My Hat Back is a quirky learner-reader picture book with a mischievous and macabre twist at the end.

The book starts of innocently with bear looking for his hat. He politely asks the other animals one at a time if they have seen it.

(Frog) ‘’No I have not seen any hats around here’’

When he gets to rabbit, who is obviously wearing Bear’s hat, he poses the same question…

Funnily enough, Bear does not seem to notice that Rabbit is wearing his hat.

As he is describing his hat to Deer later on, Bear realizes he has seen his hat, and that Rabbit had it all along.

He runs back to Rabbit and accuses him of stealing his hat. They both look at each other with their suspicious eyes.

Bear is shown sitting on the ground wearing his red hat.  Rabbit is nowhere to be seen.

Another animal approaches Bear and politely asks him if he has seen a rabbit wearing a hat.

‘’No. Why are you asking me? I haven’t seen him.  I haven’t seen any rabbits anywhere.  I would not eat a rabbit.  Don’t ask me any more questions.’’

Jon Klassen’s illustrations are incredibly quirky and grungy with plenty of breathing space.  If you are familiar with his other books, you can tell straight away who illustrated this book!

While the story is a little macabre, it’s no worse than a fairytale.  This story softens the blow in a hilarious way by suggesting, rather than saying outright that the bear ate the rabbit.

I Want My Hat Back is a quirky learner-reader picture book with a mischievous and macabre twist at the end.

* The Geisel Award is given annually to the author(s) and illustrator(s) of the most distinguished American book for beginning readers published in English in the United States during the preceding year.

What does it Mean to be Kind?