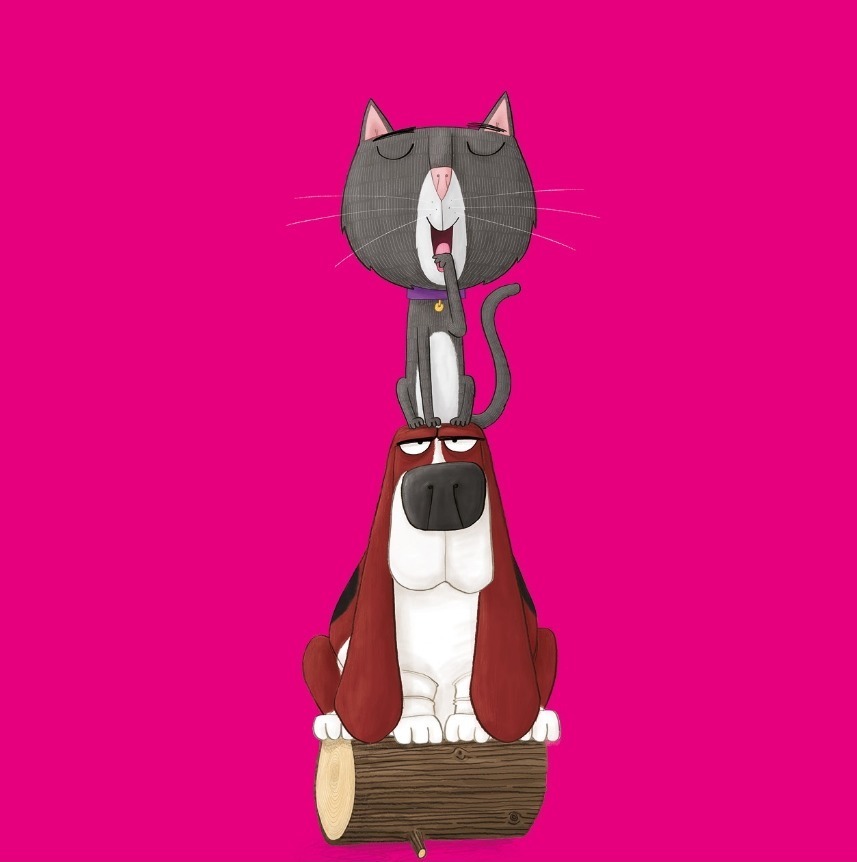 ‘’But I’ve already read it three times,’’ I reply.

She’s now looking at me like I said a bad word …. or worse, told her she had to eat another piece of broccoli before getting desert.

Her arms fold across her chest and she makes a little ‘’hmmppph’’ noise.

She stares at me …. I stare back. Her expression is sullen.

This is going downhill fast

I can’t help it, I smirk.  She looks so cute when she’s trying to be grumpy.

…. And then I give in and tell he I’ll read it one more time.

‘’What is it that you like about this book?’’ I ask her after the fourth read through.

‘’Everything!’’ she yells enthusiastically.

So there we go … Oi Cat! is a hilarious, rhyming picture book that children like ‘’everything’’ about!

My first impressions of this book were of how bold and bright the illustrations were. My second observation began with the frog …. He is bossy!

The cat is swatting little bugs with a fly swatter, complaining they are biting him on the bottom.

They begin discussing the cat’s options.

‘’If you were an alpaca you could sit on a cream cracker,’’ said the dog. He also thinks it’s a shame the cat is not a pony, as then he could sit on some macaroni.

According to the frog, whatever the cat sits on, it has to rhyme with cat.

You’ll have to wait and see!

Kes Gray and Jim Field are the award-winning team behind, Oi Frog and Oi Dog.  The combined series has currently sold over 900,000 copies worldwide.

Gray has written over 70 books for children and the clever rhyming in this one is great for holding a child’s attention.  Field is a talented illustrator and brings a hilarity to the story that will absolutely make both children and adults laugh out loud.

Oi Cat! is a clever, rhyming read-aloud picture book, featuring silliness, animals and some great illustrations.  Guaranteed to be a repeat reader, everything about this book is a winner!

The Most Magnificent Thing

How to Get your Kid into the Kitchen

Just Ask! Be Different, Be Brave, Be You