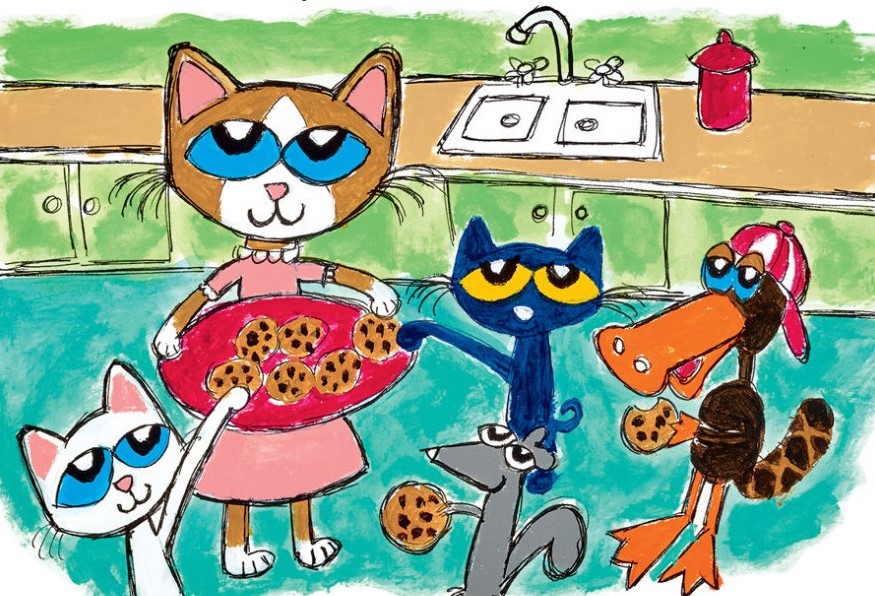 My children are 2.5 years apart, so when it comes to picture books, they have different needs and wants.

My four-year-old girl like simpler books that rhyme so that she can memorize them and then ‘’read’’ with me.  My seven-year-old boy is starting to like chapter books like Captain Underpants.

So, at bed-time, they take turns choosing the book that is read.  This means that one of them is nearly always complaining about the book the other has chosen …

When it comes to Pete the Cat, this never happens!  I’m not sure why, but this groovy blue cat just appeals to both of them.

…and it’s no coincidence either!  Pete the Cat is a bestselling series and he even has his own website featuring songs, videos and printable activities.

Pete the Cat and the Super Cool Science Fair is another great addition to the bestselling series. This groovy blue cat is appealing to many and it’s a great opportunity to begin your Pete the Cat collection or add to your existing one.

Pete cannot wait for Friday as his school is having a science fair. His teacher places him in a group with three other friends and they all decide to make a volcano for the fair.

They plan their experiment at Pete’s house, supported by Pete’s mom of course who supplies the cookies.

A paper mâché volcano is built around a plastic bottle, but the paint in the brown bottle is actually blue. Oh no!

In goes the baking soda, liquid dish soap, and vinegar.  Nothing happens at first, but then …a huge mess of lava happens!

When they get to the fair, they see all the other great experiments.  Gus thinks they don’t have a chance but Pete tells him not to worry as they have a secret ingredient.

Pete’s teacher loves the blue volcano and the secret ingredient?

It turns out to be glitter!

Kimberly and James Dean are the New York Times Bestselling team behind the Pete the Cat Series. Both left corporate jobs in the late 90’s to pursue their passion for art and in 2004, sat down at their kitchen table to work on a Pete the Cat book together, which was Pete the Cat and his Magic Sunglasses.  They say that Pete the Cat has bought magic into their lives.

Pete the Cat and the Super Cool Science Fair is a general all-rounder enjoyed by many! It’s another great addition to the bestselling series and this is a great opportunity to begin your Pete the Cat collection or add to your existing one.

Your Baby’s First Word Will Be Dada

How to Babysit a Grandma