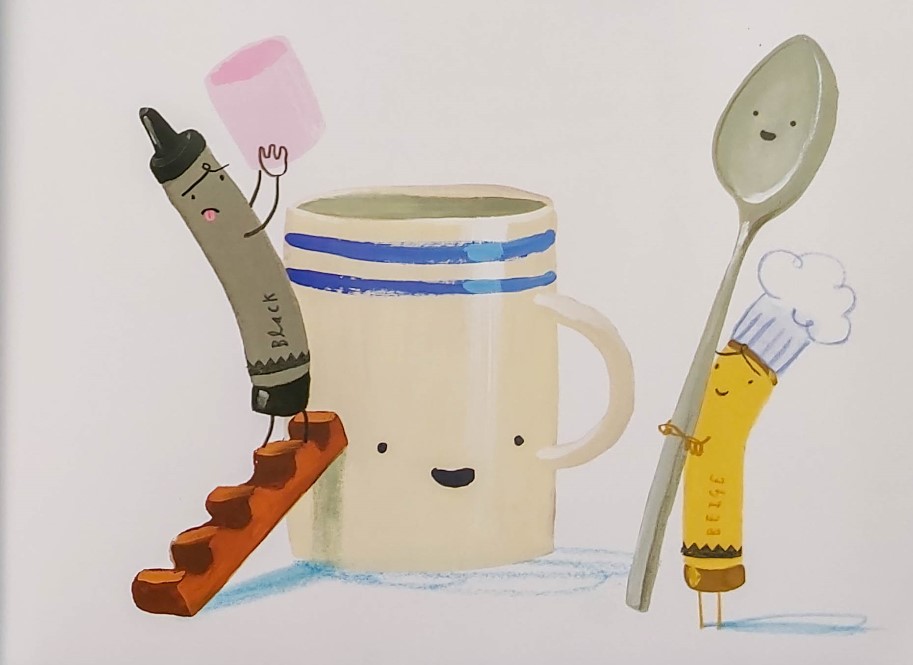 That’s how long my kids sat down with this book and enjoyed it together …. with no arguments.

That alone makes it a huge winner in my house.

The Crayons’ Christmas is more than just a funny story …

Every two or three pages is an envelope containing a letter and activity for the kids to do.

It’s the perfect book for occupying the kids indoors!

The Crayons’ Christmas is just as hilarious as the others in the series but with the added bonus of real folded letters, games and crafts that kids can pull from the envelopes within the pages of the book.

Duncan was making Christmas cards with his crayons on a snowy December day when the postman delivered a letter.

The letter was addressed to Peach Crayon!

Peach Crayon’s mom has written him a letter from Florida and sent him some clothes. Fans of The Day the Crayons Quit will remember that Peach felt naked as his wrapper had been removed.

The clothes form the craft project in which kids can press out a cardboard version of Peach Crayon, and dress him in various press out outfits.  There are seven different outfits to choose from!

Feeling Christmassy, the crayons get out the box of decorations, only to find silver crayon who was stuck in the box from last year.  The candy cane is annoyed no-one has eaten him and he is being used as a decoration.

The postman arrives with a letter for Beige Crayon, it’s from his dad and contains his secret gluten-free Christmas cookies and hot cocoa recipe.

(Kids remove the letter and recipe from the envelope here)

Gray Crayon who is away celebrating Hanukkah with his family has sent them a letter with a press out template for a dreidel, and the chunky toddler crayon has apparently ordered himself a present as it also shows up in the mail.

A letter is even received from the NORTH POLE! Although not from the red, jolly man himself, it’s from some of Duncan’s crayons … Esteban (The Magnificent) and Neon Red.

Apparently, they won’t make it home for Christmas as they are ‘’helping this old guy light his sleigh to deliver gifts to some kids he knows or whatever.’’

These two roaming crayons have sent Duncan a map with humorous details including worldwide icons placed in the wrong countries.

The last page features a pop-up Christmas tree that the crayons made for Duncan as a gift.

Drew Daywalk and Oliver Jeffers have delivered again with an entertaining Crayon story.  Make sure to pay close attention to what the crayons are up to in the illustrations or you might miss some of the laugh-out-loud antics.

The Crayons’ Christmas is a perfect gift for fans of The Day the Crayons Quit and The Day The Crayons Came Home. It’s just as hilarious (if not more) than the others, but with the added bonus of real folded letters, games and crafts that kids can pull from the envelopes within the pages of the book.

Made for Me: The Book for “Bedtime” with Dad