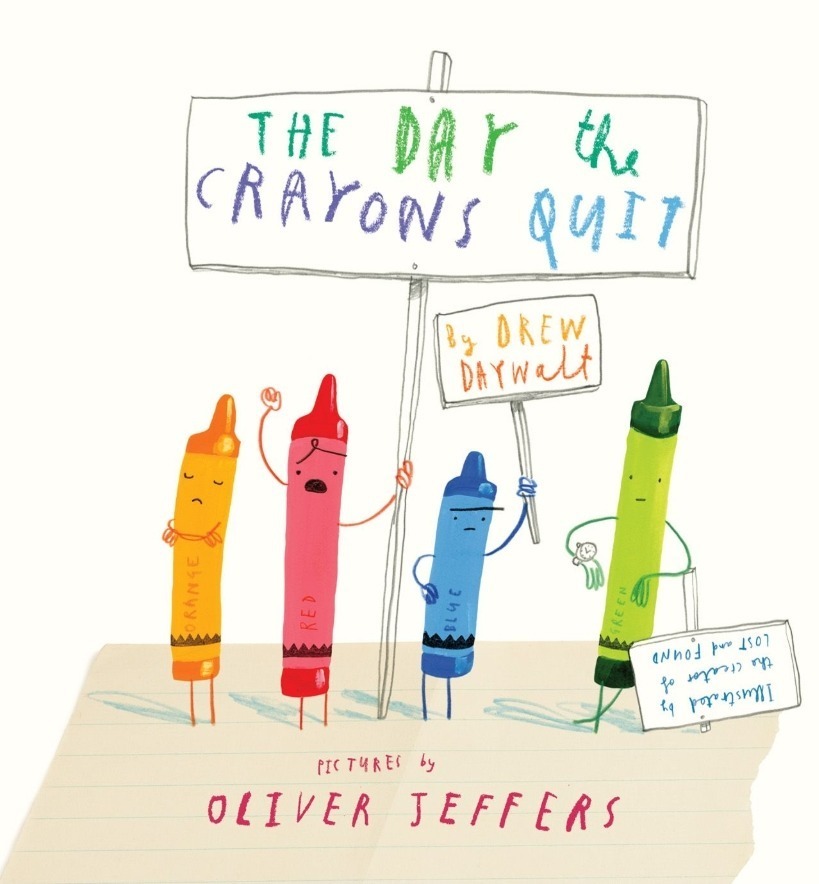 ‘’Why don’t you use some different color crayons?’’ I suggest to my son.  He colors entire pages in either red or green, his favorite colors at the moment.

‘’I like red!’’ he replies, tongue sticking out in concentration as he attempts to use the last little stub of his favorite colored crayon.

Although he loves going to school, my six-year-old son has never found learning easy.  He struggles particularly with learning to read and write, much like his dad did.

He loves religious studies though, in fact, excels at it.  He brought home a little story book about Mary, mother of Jesus the other week and had colored in all the pictures himself.

While most of the other kids have moved onto coloring Mary neatly with a variety of colors, he had chosen his favorite color and gave it a good scribbly workout.

So when we opened the book, The Day The Crayons Quit a few days later, we were all in stitches about how the crayons in the story had the same problems as my son’s crayons.

This hilarious and colorful #1 New York Times bestseller will leave you in stitches, and nodding your head in agreement.

Duncan just wants to color, but when he opens his box of crayons in class, he finds a stack of letters with his name on them.

His crayons have had enough!

According to the letters, his red crayon needs a rest and his purple crayon says he will completely lose it if he doesn’t start coloring between the lines.

They grey crayon is sick of coloring all the large animals, like elephants and whales.

The green crayon is pretty happy, but is hoping Duncan will settle the fight between the yellow and orange crayon, who both feel they are the true color of the sun.

The peach crayon is unhappy because Duncan has pulled off his wrapper, leaving him naked at school. He is too embarrassed to leave the box.

The book ends with Duncan coming up with a great idea to keep all of his crayons happy.  He even earns a ‘’good work’’ sticker from his teacher for coloring, and a ‘’gold star’’ for creativity.

Author Drew Daywalt has captured the crayons complaints hilariously.  They are totally relatable to crayon boxes all over the world. Except, in my four-year-old daughter’s case, it would be the pink and purple crayons complaining of being over-worked.

Illustrator Oliver Jeffers is a respected artist and captures ‘’Duncan’s Illustrations’’ exactly how they should be, in the style of a child let loose with a crayon.

The Day the Crayons Quit is a great all-rounder type book.  Great for reading to your own kids and perfect for giving as a gift. This hilarious and colorful #1 New York Times bestseller will leave you in stitches, and nodding your head in agreement.

The Day You Begin