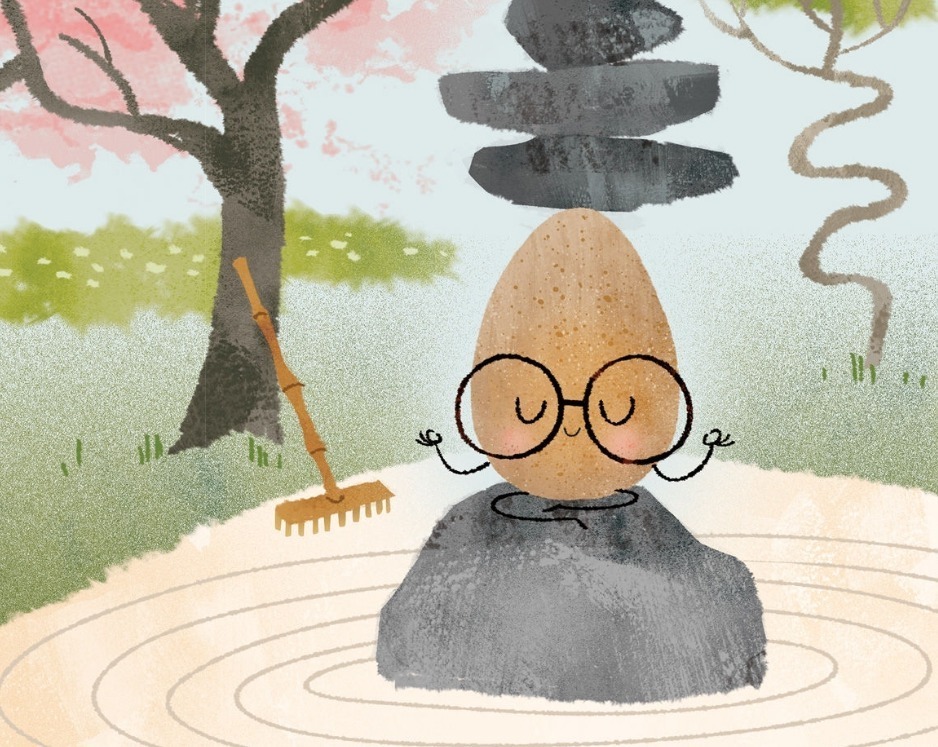 She was referring to the fact that a few of the kids (my son especially), would get really frustrated when the other kids weren’t behaving perfectly … and would tattle on them!

He does the same at home with his little sister, who doesn’t behave as well as him 😊

‘’Mom, Trillian’s not brushing her teeth properly!’’ he tattles.

‘’Mom, Trillian isn’t cleaning her room.  She’s just playing with her toys in there!’’ he tattles.

‘’Mom, Trillian said she’s not going to play with me EVER again!’’ he tattles.

His little sister is sick of being tattled on at this point, and is standing with her arms folded across her chest, glaring at him.

The Good Egg by Jory John, has been a great book to remind him about self-care and accepting those we love … even if they are behaving a little rotten.

The book begins with The Good Egg rescuing a cat from a tree.  Why?  Because according to him, he’s a verrrrrrry good egg.

The Good Egg does all kinds of good things, like carrying your groceries, watering your plants and painting your house.

He claims he was always this way, unlike the other 11 eggs in his carton who aren’t always on their best behavior.

The other 11 eggs ignore their bedtime, eat only sugary cereal, throw tantrums and cry for no reason.

The Good Egg tries to change their behavior, but it just makes him exhausted and eventually, cracks began to appear in his shell.

The doctor tells him its from all the pressure he is putting on himself.

‘’The pressure of making sure everybody was as good as me’’.

The Good Egg leaves, and makes some changes in his life. He takes long walks, reads books, writes in his journal and for once, finds time for him.  The cracks in his shell start to heal.

He returns home, vowing to be good to himself and not to worry as much about the others. He has realized he doesn’t have to be perfect all the time and even begins enjoying himself by sliding down the stairs on a toboggan.

Jory John is a New York Times bestselling author and two-time E.B. White Read-Aloud Honor recipient. The Good Egg is a wonderful reminder that we don’t have to be Grade A perfect all the time, and ties in well with The Bad Seed, another one of his bestsellers with a great message.

Illustrator Pete Oswald illustrates this picture book in his trademark humorous style.  Oswald has also worked on many popular films including ParaNorman, Cloudy with a Chance of Meatballs and the Angry Birds Movie.

The Good Egg, a #1 New York Times bestseller is a great picture book that reminds us about balance, self-care and accepting those we love … even if they are not Grade A perfect all the time.

By the Light of the Moon

My Mouth is a Volcano