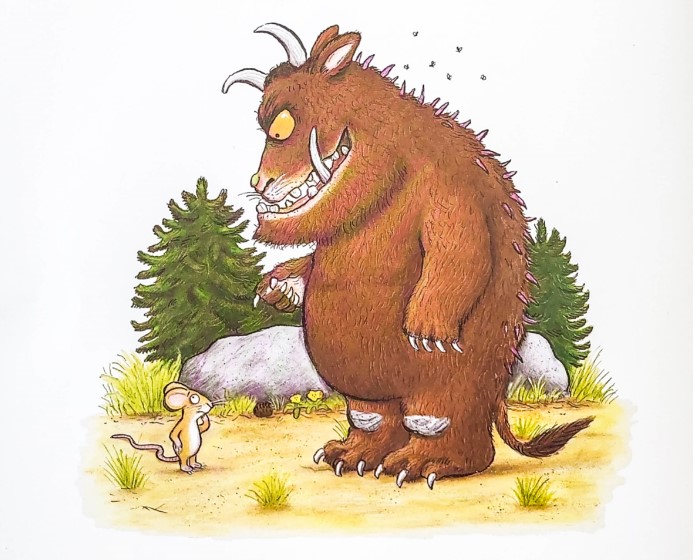 The Gruffalo celebrates 20 years this year and has earned its reputation as a classic read!

We own two of the 13.5 million copies that have sold worldwide.  My favorite is the hardcover version because, well….the bigger the better when it comes to illustrations!

The second is a pocket-sized version that the Easter Bunny delivered one year.  It came with a little Gruffalo toy and a chocolate egg sat on top of the box.

We travel regularly as a family and I have a rule that the kids have to pack at least one book of their choosing in their own carry bag.

As a result, our little mini Gruffalo has travelled to some exciting places, most recently to explore the amazing Angkor Wat in Cambodia.

You see, even though the Easter Bunny gave my son the Gruffalo when he was just three years old, he still chooses it as his travel book nearly four years later.

Funnily enough, we have never taken it into the deep, dark wood ….

This award-winning rhyming story of a mouse that outwits a monster has earned its place as a modern classic and will no doubt, continue to be a favorite for decades to come.  No bookshelf is completed without The Gruffalo!

‘’A mouse took a stroll through the deep dark wood

See, I told you it rhymes.  None of that clunky rhyming either.  The words in this book flow like a well written piece of music.

The mouse, well aware that the fox wants to eat him, tells the fox that he’s waiting for a Gruffalo.  According to mouse, the Gruffalo …

He informs fox that he is meeting him here by these rocks, and his favorite food is roasted fox.

Of course, the fox isn’t taking any chances and scampers off.

He outwits an owl and a snake in the same manner, commenting after the snake leaves that there is no such thing as a Gruffalo.

You’ll have to read the book to find out how he outwits the Gruffalo!

Julia Donaldson is the prize-winning author of some of the world’s best-loved picture books, including Room on the Broom and the Zog series.  Axel Sheffler, who has illustrated many of her award-winning books, really brings the characters to life in the magical way that he is well known for.

The Gruffalo will no doubt, continue to be a favorite for many years to come.  This award-winning rhyming story of a mouse that outwits a monster has earned its place as a modern classic. No bookshelf is completed without The Gruffalo …

Get your copy today!

Jessica Palmer - July 12, 2019
The New York Times bestselling picture book, Grumpy Monkey has been the perfect tool to help us teach our daughter about accepting feelings.