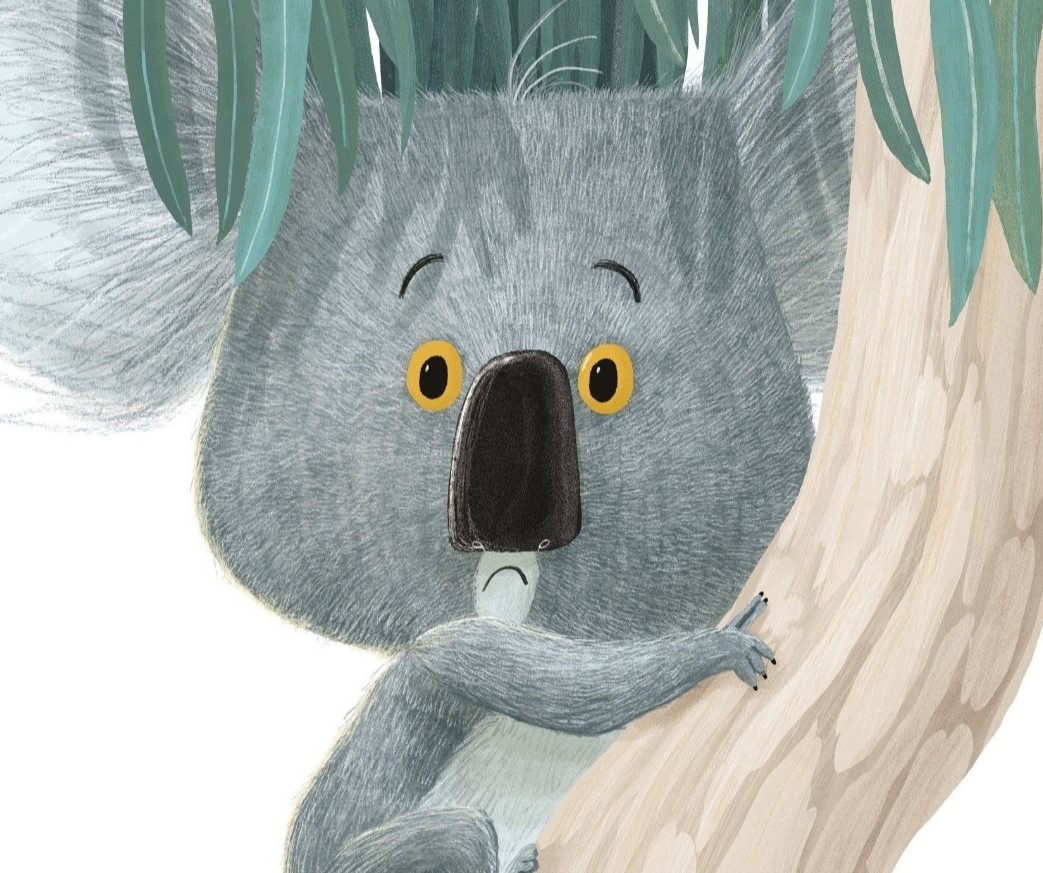 I recently had the great pleasure of cuddling a koala at a sanctuary in Brisbane, Australia two months ago.

My 9kg cuddle named Rory had fur thicker than any sheep, and as that he was munching on Eucalyptus leaves when I held him, he smelled a lot like a cough drop.

Nothing like a koala cuddle to clear the nose!

So when I recently saw the picture book, The Koala Who Could, I just had to read it!

You know what? … It’s turned out to be one of my favorite books of the year!

The illustrations are just great, and it has a fantastic message of encouraging children to be more open-minded to change.

Change can be hard, especially for kids! The Koala Who Could is a wonderful rhyming picture book about being brave and trying something new that may seem scary at first.

I was sold by the first full-page spread.  It introduces the main character, Kevin the Koala, in his tree with a stunning background of a gorge, creek and other Australian animals.

If you ever get a chance to visit the Northern Territory in Australia, some parts of it look exactly like this!

Kevin was good at clinging to his tree, eating leaves and taking naps. He liked the slow pace of being up high in the tree as it made him feel safe. Kevin preferred not to move, nor to change.

Wombat stopped by one day and shouted, ‘’Hey, Kevin! Why don’t you come down here and play?’’

Kevin thinks that he should stay in his tree and tells wombat politely that he can’t because he is busy right now.

The Kangaroos and Dingos like the idea of playing and ask him down as well.  But Kevin wasn’t the ‘’do-things-quick’’ type and said, ‘’I’ve clinging to do.  But thanks for the thought.’’

Kevin sat and watched them chatter and share and realized a part of him wished he could join in.  But he knew he’d miss home and it was just too risky, so he’d always say No.

One morning he woke to a worrying sound.  A bird was tapping a hole into his tree!  As his tree slowly started to lean over, Kevin was scared and despite the other animals telling him they will catch him, he just couldn’t let go.

Down came the tree with Kevin still clinging to it!

He slowly un-clung and you know what? He felt ‘’Springy and Light and Happy and Young!’’. The worst thing he could think of had happened…. And he was just fine!

So … Kevin didn’t hold back anymore when Wombat held out a most welcoming paw….and even though it wasn’t part of his plan, he said ‘’Yes, I think that I can.’’

Rachel Bright has written several popular books for children including Love Monster and The Lion Inside. She seems to have a knack for creating great entertaining books for children.  Jim Field is a fantastic artist who has illustrated a string of bestselling, multi-award-winning children’s books.  His illustrations are cute, bold and appealing to a wide audience.

In an inspiring picture book for children that acknowledges that change can be hard, The Koala Who Could is a wonderful rhyming story about being brave and trying something new that may seem scary at first. After all, ‘’Life can be great when you try something new!’’

What does it Mean to be Kind?