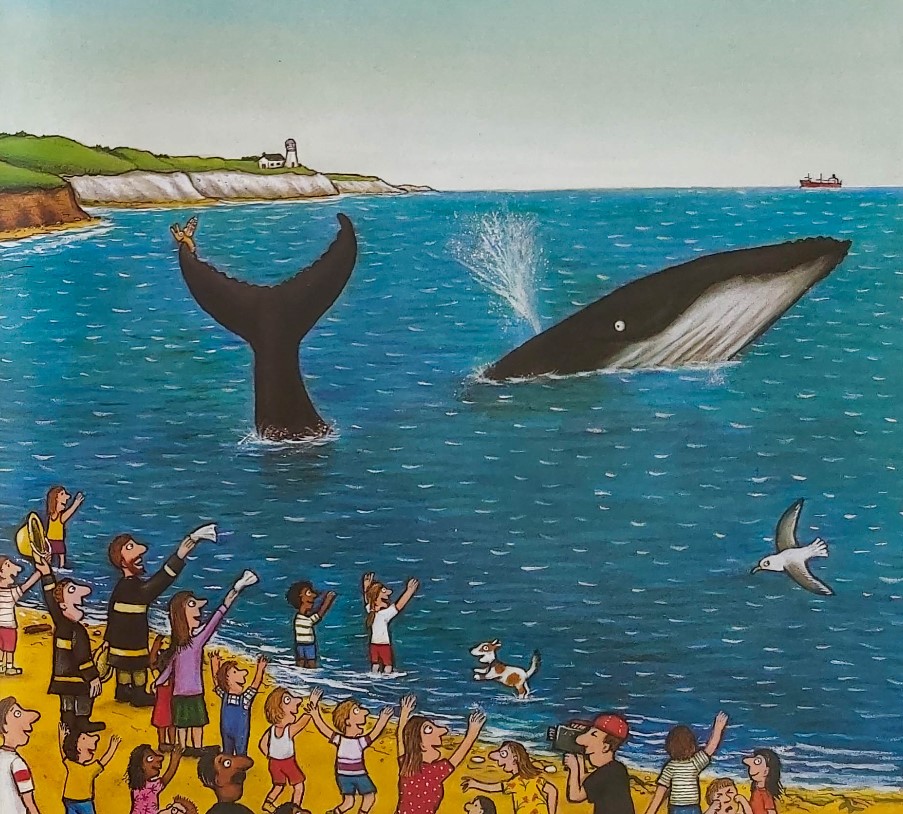 I was fortunate enough to grow up in a small-town right beside the ocean.  Back then, the town was large enough to have a few family owned stores, a fishing community and two public schools.

However, it wasn’t large enough to have a hospital.  So, when I was young and required an emergency procedure to remove my appendix, I spent a lonely two weeks in hospital in the neighboring town.

I was always fascinated by the whales that visited our bay a few months out of every year, as were all the tourists that came for the same reason. As I lay in hospital … bored … I often wandered about the whales, imagining the adventures they got up to once they left our sleepy bay and continued their annual migration.

While these days, I don’t remember the details of what I imagined, I do know they filled the thoughts of a very young, scared and incredibly bored child.

I like to think they went on such adventures as The Snail and the Whale in the children’s picture book by Julia Donaldson and Axel Scheffler.

I just love reading this book to the kids as it has a bit of everything in it ….

The Snail and the Whale is a gem of a story and in my opinion, one of the best created by the award-winning team of Julia Donaldson and Axel Scheffler.

We are introduced to the snail and whale in rhyming verse on the very first page.

‘’This is a tale of a tiny snail, and a great big, grey-blue humpback whale.’’

The tiny snails gazes out to see and longs to set sail, but the other snails in the flock tell him to stay put.

The snail writes a slimy message on a rock that says …

‘’Lift wanted around the world’’

A whale comes by one night and offers the snail his tail, saying ‘’Come sail with me.’’

They pass through many landscapes, with the snail holding on tight to the whale’s tail in each one.

‘’This is the sea, So wild and free, That carried the whale, And the snail on his tail

To towering icebergs and far-off lands, With fiery mountains and golden sands.’’

They pass through giant waves, and caves beneath the water. They experience sunshine, thunderstorms and lightning.

One day, they come across some speedboats that cause the whale to lose his way.  He becomes beached in a bay and can’t move.

The snail feels helpless and small but comes up with a plan. Rushing to a nearby school, he leaves a silvery trail on the chalkboard that says, ‘’Save the whale’’

The children fetch the fireman and they all rush to the bay to keep the whale cool while waiting for the tide to come back in.

Heading back home, the whale and the snail tell their adventurous tales to the other snails.

Julia Donaldson is a top-selling author of children’s books, with over 65- million sold. She is well known for her stories, The Gruffalo, Room on the Broom and Stick Man which are also all illustrated by Axel Scheffler.  Together they are a winning team!

With flawless rhythmic verse making it perfect to read out-loud, The Snail and the Whale is a gem of a story and in my opinion, one of the best created by the award-winning team of Julia Donaldson and Axel Scheffler.

Dinner Recipes The Whole Family Can Help With

We Don’t Eat Our Classmates