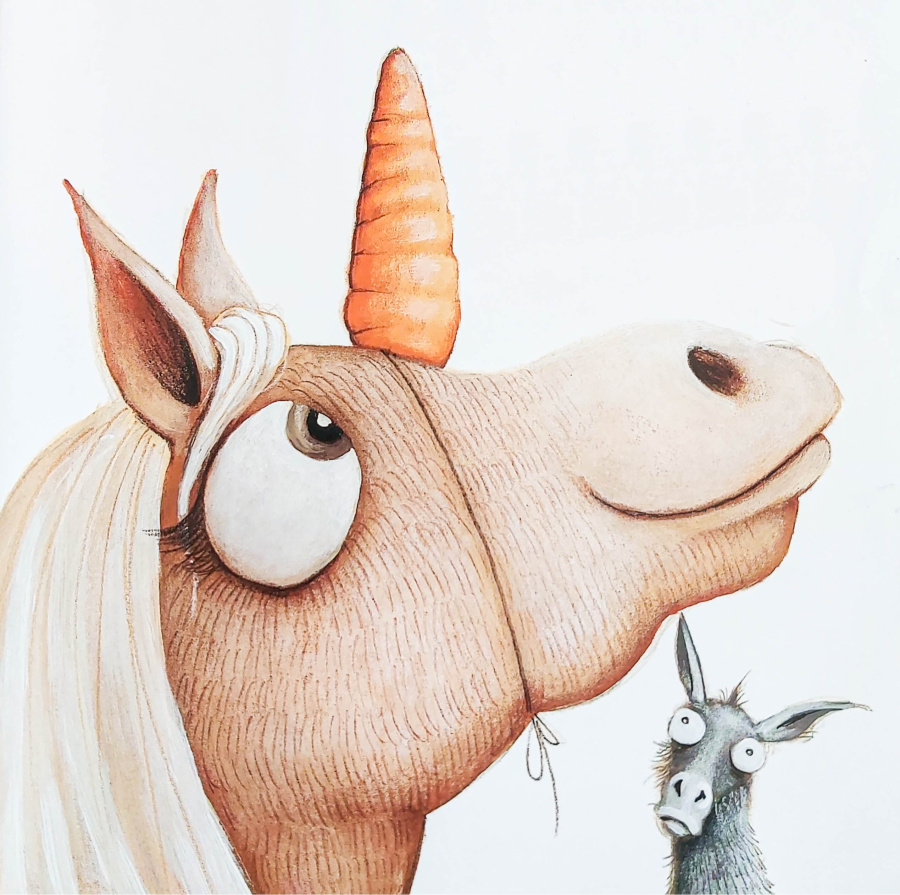 Sometimes I’m not real thrilled with the bedtime book my kids choose.  I’m pretty sure my son chooses the longest one he can find to delay shutting his eyes.

But whenever they choose Thelma the Unicorn, which is at least once a week, I feel like jumping in the air and yelling, ‘’Yes!’’

You see, Thelma the Unicorn is one of MY favorite books!

It has a great message, has cute and sometimes hilarious pictures, and its clever rhyming makes it really easy to read ….

Out of all the learning to love who you are themed books …Thelma the Unicorn is by far the sparkliest and best!

Thelma is not really a unicorn!

Thelma is actually a cute little pony who doesn’t feel like she is good enough.  She wishes with all her heart to be a unicorn.

Her best friend Otis thinks she is perfect just the way she is.

Thelma sees a carrot on the ground and has a great idea.  She ties it to her nose and decides that she will just SAY that she’s a unicorn.

In a rare moment of fate that involves a passing truck filled with pink paint and glitter, Thelma’s wish comes true.

At first, she enjoys all the attention and fame.  However, it turns out being famous is not as great as she once thought.

The fans won’t leave her alone and some of them are actually really mean.

Alone in her room one night, she realizes that she doesn’t feel great. In fact, all she feels is lonely.

And with that, she ditches her ‘magic horn’, washes off her sparkles, and heads on home to Otis. The books ends in the cutest way …..

‘’And when he asked about her trip, beneath their favorite tree, she simply said, ‘Oh, it was fun …. But I’d rather just be me.’”

Aaron Blabey is the award-winning author and illustrator behind the Pig the Pug series and he does not disappoint with Thelma the Unicorn, who is a much more likable character. Like his other children’s books, the illustrations are unique, often hilarious and recognizable as his.

Thelma the Unicorn is an entertaining picture book about learning to love who you are, even if you don’t have sparkles. Out of all the books with this theme, Thelma is by far the best!