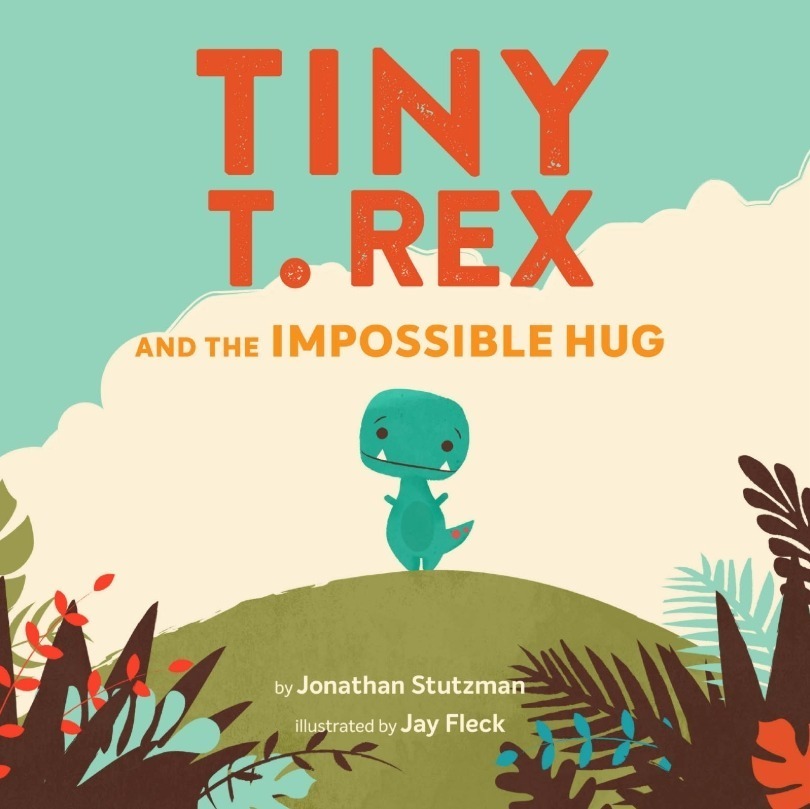 There are two subjects in our house that are guaranteed to make both kids laugh … every time.

The first one of course, is toilet humor.

The second one is dinosaurs. More specifically, the fact that T-Rex’s have impossibly small arms that make doing everyday things impossible.

You know … like push-ups, using cutlery, putting on a hat or hugging. It hasn’t occurred to my kids that T-Rex’s probably don’t care much for these things.

Thankfully, this book is about the latter. Because let’s face it, there is only so much toilet humor parents can take.

Tiny T-Rex and the Impossible Hug is a super cute children’s book about the power of friendship and determination.

Tiny T-Rex may be small, but his heart is big.  He desperately wants to give his Stegosaurus friend Pointy a hug to cheer him up.

Except, Tiny has teeny little T-Rex arms and cannot give Pointy a big hug.

Tiny asks his father for advice.

‘’Rexes are thinkers, not huggers,’’ his father says, before going on to suggest that ‘’mathematics might be the answer to your problem.’’

Tiny knows that Pointy doesn’t like math, so he asks his Aunt Junip, who is clearly an ‘’alternative’’ dinosaur.  Aunt Junip is doing Yoga and squeezing fresh cucumber juice at the same time.  Her suggestion is not much help either.

He goes in search of his mother who tells him it doesn’t matter if his arms are tiny, as his heart is big.

With predictable results, Tiny practices on a punching bag, an ice-cream cone and even a cactus.

He gives practicing one last go, and attempts to hug a tree.  Except… it isn’t a tree he hugs and he is taken up in the air by a pterodactyl where he accidently falls and lands exactly where he wants to be.

The story ends with Tiny giving Pointy a big hug, finally cheering him up.

Jonathon Stutzman has written an incredibly endearing children’s book in Tiny T-Rex and the Impossible Hug that touches slightly on mental health and highlights the power of friendship and determination.

Jay Fleck illustrates this book in a simple yet incredibly appealing manner that instantly pulls the cute characters into your heart.

Tiny T-Rex and the Impossible Hug is a great all rounder book that is perfect for any occasion and will appeal to a wide range of kids … including parents!

Alma and How She Got Her Name