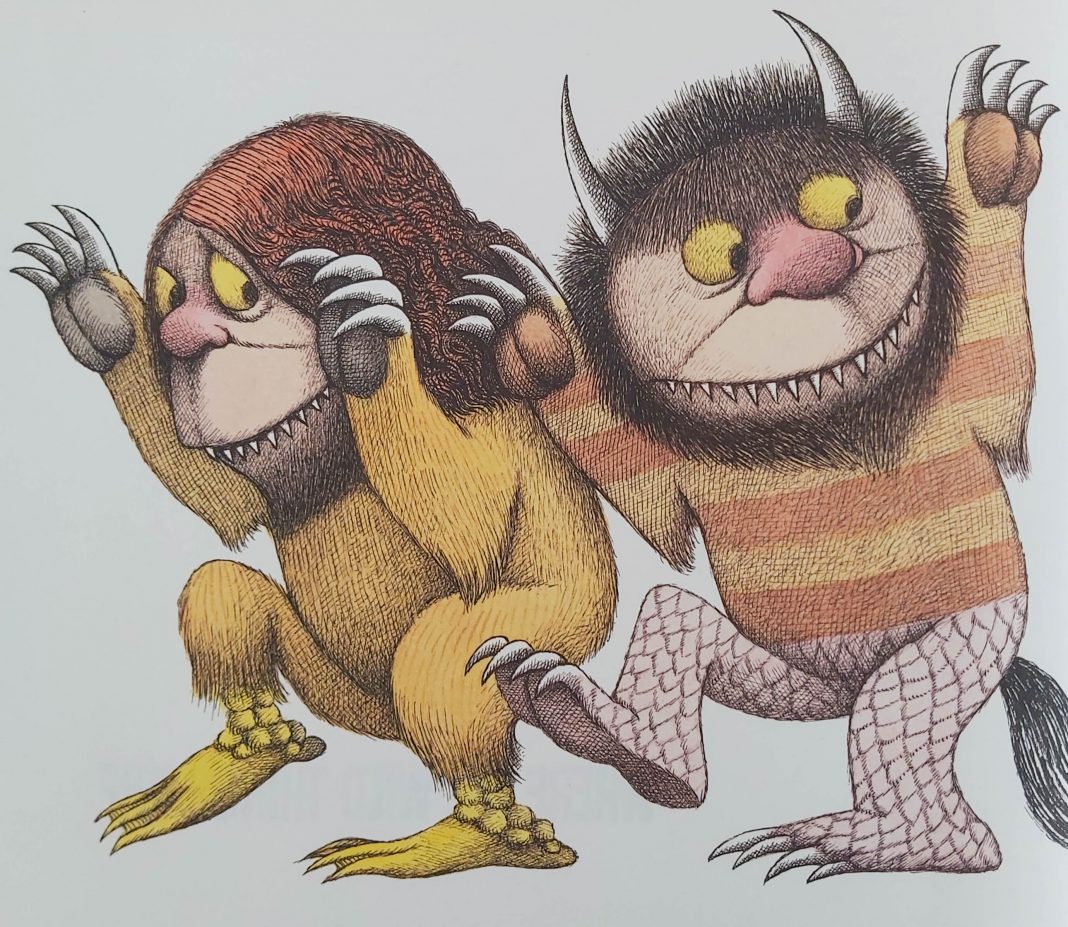 🏆 Caldecott Medal for Most Distinguished Picture Book of the Year 1964*

I remember reading Where The Wild Things Are as a child.  I enjoyed Max’s ‘’adventure’’ immensely, but I especially enjoyed the illustration of Max swinging from the trees after he had tamed the wild things.

Mom would drive me to the small-town library once a week after school. Where The Wild Things Are was always proudly on display, never tucked away forgotten within the dimly lit shelves.

While she would disappear into the adult section to find books on gardening and other such subjects boring to a small child, I sat on a beanbag in the children’s section and browsed the picture books.

When it came time to leave, Mom would have to cull my books as we were only allowed to borrow four and I would often have twice that many.

Even though most books are electronically scanned out of libraries now, wouldn’t it be amazing if my name was still scrawled childishly on the borrowing card in the back of Where the Wild Things Are in that public library?

Where The Wild Things Are is a true timeless, children’s classic about a small boy, his large imagination and the journey it takes him on.

The books begins with Max behaving less than ideal. He is wearing a wolf suit and his mother calls him a ‘’WILD THING!’’

Like many kids worldwide when they are being cheeky, Max is sent to bed without dinner.

Eventually, the bedroom walls became the world all around.  He appears to be in a wild place.

‘’An ocean tumbled by with a private boat for Max ….’’

After a very long time (in and out of weeks and almost over a year), Max arrives where the wild things are.

Max tames them with the magic trick of staring into their yellow eyes without blinking.  He is crowned king of all wild things and cries, ‘’Let the wild rumpus start!’’

He seems to be having a whole lot of fun with the wild things at this point.

After he sends the wild things to bed without their supper, Max is lonely and wants to be where someone loves him best of all …. plus he smells good things to eat.

Renouncing his crown, he sails back home ‘’into the night of his very own room where he found his supper waiting for him … and it was still hot’’

Every time we read this book, I love to ask the kids, ‘’Do you think Max ever really left his room?’’ … My six-year-old gets it, but my four-year-old doesn’t … yet!

Maurice Sendak was a multi-award winning children’s author and illustrator who has created simply, the epitome of a picture book in Where The Wild Things Are. The story was originally supposed to features horses, not monsters … but Sendak was better at drawing ‘’things’’ than horses.

Where The Wild Things Are is a true timeless children’s classic about a small boy, his large imagination and the journey it takes him on. If it’s not already on your bookshelf, your bookshelf is not yet complete!

* The Caldecott Medal is awarded annually by the American Library Association, to the artist of the most distinguished American picture book for children.